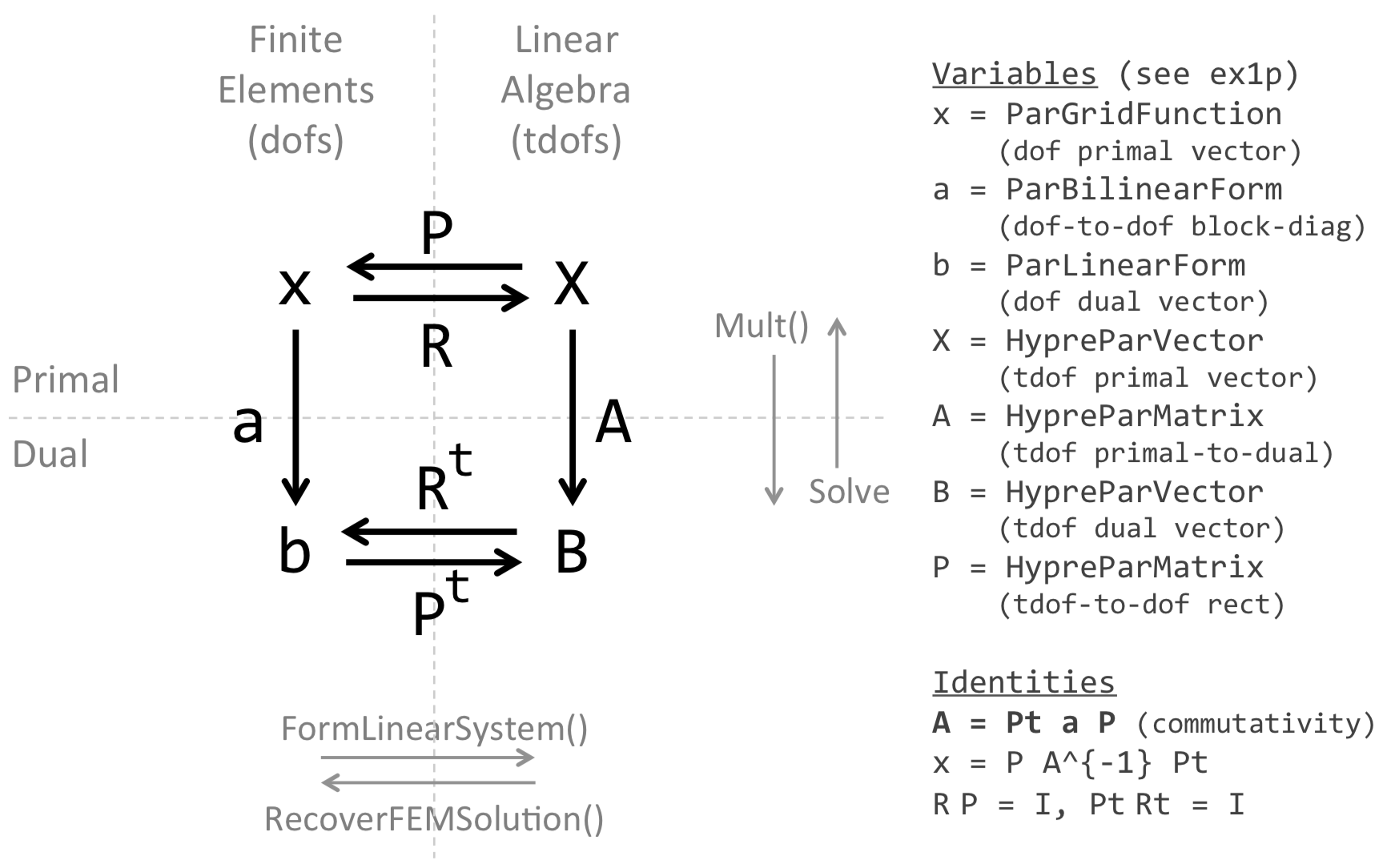 The finite element method is based on the notion that a smooth function can be approximated by a sum of piece-wise smooth functions (typically piece-wise polynomials) called basis functions: $$f(\vec{x})\approx\sum_i f_i \phi_i(\vec{x}) \label{expan}$$ The support of an individual basis function, $\;\phi_i(\vec{x})$, will either be a single zone or a collection of zones that share a common vertex, edge, or face. The expansion coefficients, $\;f_i$, are linear functionals of the field being approximated, $\;f(\vec{x})$ in this case. The $\;f_i$ could be as simple as values of the function at particular points, called interpolation points, e.g. $\;f_i=f(\vec{x}_i)$, or they could be integrals of the field over submanifolds of the domain, e.g. $\;f_i = \int_{\Omega_i}f(\vec{x})d\vec{x}$. There are many possibilities but the expansion coefficients must be linear functionals of $\;f(\vec{x})$. The expansion coefficients are often called degrees of freedom, or DoFs for short, though in certain cases they may not be actually independent because of some problem specific constraints. We'll discuss this more in a later section on True DoFs.

Once the basis functions are defined, with some unique ordering, the expansion coefficients can be stored in a vector using the same order. Such a vector of coefficients is called a primal vector. The original function, $\;f(\vec{x})$, can then be approximated using \eqref{expan}. In practice this requires not only the primal vector of coefficients but also knowledge of the mesh and the basis functions for each element of the mesh. In MFEM these collections of information are combined into GridFunction objects (or ParGridFunction objects when used in parallel) which represent piece-wise functions belonging to a finite element approximation space.

The GridFunction class contains many Get methods which can compute the expansion \eqref{expan} at particular locations within an element. The primal vector of expansion coefficients can be computed by solving a linear system or by using any of the various Project methods provided by the GridFunction class. These methods compute the degrees of freedom, $\;f_i$, or some subset of them, from a Coefficient object representing $\;f(\vec{x})$. Other methods in this class can be used to compute various measures of the error in the finite element approximation of $\;f(\vec{x})$.

Any vector space, such as the space of primal vectors, has a dual space containing co-vectors a.k.a. dual vectors. In this context a dual vector is a linear functional of a primal vector meaning that the action of a dual vector upon a primal vector is a real number. For example, the integral of a field over a domain, $\;\alpha=\int_\Omega f(\vec{x})d\vec{x}$, is a linear functional because the integral is linear with respect to the function being integrated and the result is a real number. Indeed we can derive similar linear functionals using compatible functions, $\;g(\vec{x})$, in this way $G(f)=\int_\Omega g(\vec{x})f(\vec{x})d\vec{x}$. If we compute the action of our functional on the finite element basis functions, $$G_i=G(\phi_i(\vec{x})) = \int_\Omega g(\vec{x})\phi_i(\vec{x})d\vec{x}\label{dualvec},$$ and we collect the results into a vector we call this a dual vector.

Integrals such as this often arise when enforcing energy balance in physical systems. For example, if $\vec{J}$ is a current density describing a flow of charged particles and $\vec{E}$ is an electric field acting upon those particles, then $\int_\Omega\vec{J}\cdot\vec{E}\,d\vec{x}$ is the rate at which work is being done by the field on the charged particles.

MFEM provides LinearForm objects (or ParLinearForm objects in parallel) which can compute dual vectors from a given function, $\;g(\vec{x})$. These objects require not only the mesh, basis functions, and the field $\;g(\vec{x})$ but also a LinearFormIntegrator which defines precisely what type of linear functional is being computed. See Linear Form Integrators for more information about MFEM's linear form integrators.

A LinearForm objects provide one means for computing dual vectors if you have a Coefficient describing the function $\;g(\vec{x})$. If, on the other hand, you have a primal vector, $\;g_i$, representing $\;g(\vec{x})$ you can form a dual vector by multiplying $\;g_i$ by a bilinear form, see Bilinear Form Integrators for more information on bilinear forms. To understand why this is so, consider inserting the expansion \eqref{expan} into \eqref{dualvec}. $$ G_i=\int_\Omega \left(\sum_j g_j \phi_j(\vec{x})\right)\phi_i(\vec{x})d\vec{x} = \sum_j \left(\int_\Omega \phi_j(\vec{x})\phi_i(\vec{x})d\vec{x}\right)g_j \label{dualvecprod}$$ The last integral contains two indices and can therefore be viewed as an entry in a square matrix. Furthermore each dual vector entry, $\;G_i$, is equivalent to one row of a matrix-vector product between this matrix of basis function integrals and the primal vector $\;g_i$. This particular matrix, involving only the product of basis functions, is traditionally called a mass matrix. However, the action of any matrix, resulting from a bilinear form, upon a primal vector will produce a dual vector. In general, such dual vectors will have more complicated definitions than \eqref{dualvec} or \eqref{dualvecprod} but they will still be linear functionals of primal vectors.

Primal vectors contain all of the expansion coefficients needed to compute the finite element approximation of a function in each element of a mesh. When run in parallel, the local portion of a primal vector only contains data for the locally owned elements. Regardless of whether or not the simulation is being run in parallel, some of these coefficients may in fact be redundant or interdependent.

When setting up and solving a linear system to determine the finite element approximation of a field, the size of the linear system is determined by the number of true degrees-of-freedom. The details of creating this linear system are mostly hidden within the BilinearForm object. To convert individual bilinear form objects the user can call the BilinearForm::FormSystemMatrix() method, however, the more common task is to form the entire linear system with BilinearForm::FormLinearSystem(). As input, this method requires a primal vector, a dual vector, and an array of Dirichlet boundary degree-of-freedom indices. The degree-of-freedom array contains the true degrees-of-freedom, as obtained from a FiniteElementSpace object, which coincide with the Dirichlet, a.k.a. essential, boundaries.

The primal vector must contain the appropriate values for the solution on the essential boundaries. The interior of the primal vector is ignored by default although it can be used to supply an initial guess when using certain solvers. The dual vector should be an assembled LinearForm object or the product of a GridFunction and a BilinearForm. As output, BilinearForm::FormLinearSystem() produces the objects $A$, $X$, and $B$ in the linear system $A X=B$. Where $A$ is ready to be passed to the appropriate MFEM solver, $X$ is properly initialized, and $B$ has been modified to incorporate the essential boundary conditions. After the linear system has been solved the primal vector representing the solution must be built from $X$ and the original dual vector by calling BilinearForm::RecoverFEMSolution().

Which is the better option? As always, there are trade-offs. The answer depends on many variables; the complexities of the BilinearFormIntegrator and the LinearFormIntegrator, the complexity of other coefficients that may be present, the order of the basis functions, can the bilinear form be reused or is this a one-time calculation, whether the code runs on a CPU or GPU, etc. On some architectures the motion of data through memory during a matrix-vector multiplication may be expensive enough that using a LinearForm and recomputing the integrals is more efficient.

Often the construction of dual vectors is a small portion of the overall compute time so this choice may not be critical. The best choice is to test your application and determine which method is more appropriate for your algorithm on your hardware.